Colonial Contributions to WWI – from Historiana 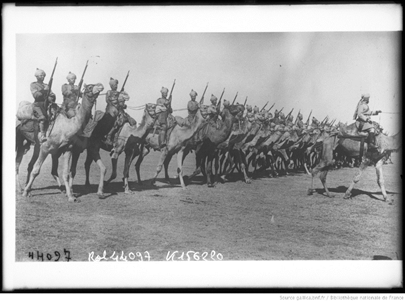 The Bikaner Camel Corps, also known as the Ganga Risala, were formed by Maharaja Ganga Singh in the Indian state of Bikaner. They played a key role in defending the Suez Canal in 1915. Img. from Historiana website.

EUROCLIO has recently published a source collection and eLearning Activity to help students investigate experiences about the contribution of European Colonies at the time of WWI. Despite the fact that it has been named the First World War, many accounts of this pivotal conflict focus almost exclusively on the experiences of Europeans, while the contributions of colonial peoples are often sidelined or even forgotten. Yet we know that over four million participated in the war effort while swathes of colonial territories were directly affected as they became theatres of war.

Available on Historiana, the materials include images and information on colonial peoples from Senegal, Madagascar, India, Egypt, German East Africa, Indochina, and many other territories who contributed to the war effort. Their stories allow students to compare and contrast the treatment of different colonial peoples by the various European powers and to consider the consequences of the war for the colonies and their inhabitants.

This source collection was made by Bridget Martin and Grace Sahota making use of sources from Europeana Collections.

Discover this learning resource, created in the framework of Europeana DSI4 project: https://historiana.eu/#/historical-content/source-collections/colonial-contributions-to-wwi