Crowds for giants – The rise and fall of dictators
In the kaleidoscope of the 1950s, a handful of political heavyweights take pride of place. Among them Joseph Stalin, who transformed the Soviet Union into a world power during his 25-year rule. At the time of his death in 1953, Stalin had imposed control on over 100 million people living in Eastern Europe. Among these citizens, discontent with low living standards and scarce consumer goods was growing. The communist party too was in dire straits, particularly after the ‘secret speech’ delivered by First Secretary Nikita Khrushchev at the party congress of 1956. His anti-Stalinist philippic spurred excitement in the eight countries bound by the Warsaw Pact. Among them was Hungary, where an uprising ensued in October 1956. After an initial victory of the rebels and the withdrawal from the Warsaw Pact proclaimed by premier Imre Nagy, the Soviet army put a violent stop to the revolt, leaving behind 2,500 casualties and a fallen giant: the statue gift ed by Stalin at the occasion of his 70th birthday. ‘The Free World’, in the meantime, had its own crosses to bear. Like Salazar in Portugal, dictator Francisco Franco ruled Spain for decades with a policy of limited personal freedom, state-controlled markets, censorship, repression and militarism. This photograph of a cheering crowd commemorates the inauguration of two very different ‘giants’: the folkloristic figures Grau and Eulàlia, whose impressive 3,5-metre silhouettes can still be seen wandering the streets of Salt. 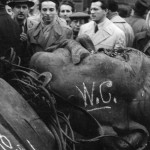 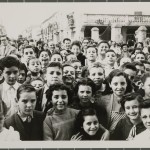 Form & function – Ingenious design
A stylish globetrotter steals the scene, flaunting a prime example of 1950s smart design: the Canasta coat, made of water- and travel-proof cotton to cater for the adventurous fashionista. The choice of an airport as a setting for commercial photo shoots such as this one, was anything but a shot in the dark: the transport sector – aviation in particular – was Britain’s most powerful lever of economic recovery in the postwar era. The story of British European Airways – an airline that operated from 1946 to 1974 and later transformed into British Airways – is exemplary. BEA operated the fi rst-ever turbine-powered commercial air service in 1950, flew its millionth passenger in 1952, and by the end of the decade had become the biggest airline outside of the States. The aircraft featured in this image was another triumph of design, be it of American origin: a Douglas DC-3, the hero of the Allies’ fleet in World War II. Its counterpart in the Luft waff e was the Messerschmitt Bf 109, one of the most-produced warplanes in history. After
the war, company director Willy Messerschmitt was convicted of collaboration and imprisoned for two years. Upon his release, as Germany was forbidden to produce aircraft s until 1955, Messerschmitt decided to target the consumer market and began producing sewing machines, prefabricated houses and small vehicles. Seen here in the streets of Girona is the three-wheeled Messerschmitt Kabinenroller KR175, designed by aircraft engineer Fritz Fend. The two-seater with plexi cover was a runaway success, as it was affordable, required a moped permit only, and allowed for ultimate liberty in personal transportation. 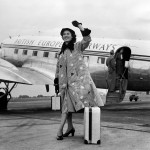 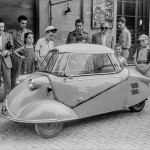 The show must go on – Politics on pellicule
Predating the 1956 uprising in Budapest by just a few months, the darker of these two fi lm stills represents a scene from A Csodacsatár (The marvelous striker): a movie by Márton Keleti about the ‘Mighty Magyars’. Hungary’s golden soccer team of the 1950s put the nation on the map as a world power in sports, thus becoming a vital element of communist propaganda. At the time of the October revolt, the majority of the team was abroad, competing in the European Cup with Budapest Honvéd. Having lost the first game to Atlético Bilbao, the players refused to return to Hungary and arranged for the return match to be played in Brussels. The team was eliminated but instead of traveling home, players got their families to join them and subsequently took off on a fundraising tour in Europe and Brazil. Upon its completion, the group fell apart. Th e Hungarian regime attempted to erase the disloyal sportsmen from the nation’s memory, as a result of which A Csodacsatár had to be partially re-fi lmed. The new version, premièring in 1957, no longer contained scenes with dissident players such as superstar Ferenc Puskás. While in this case, political messages were conveyed under the guise of an entertaining movie, many postwar fi lms featured military scenery as the backdrop to an innocuous tale. In the Swedish comedy Flyg-Bom – the fourth in a series with actor Nils Poppe as Fabian Bom – the soldiers’ uniforms and Swedish Air Force planes are just props and décors to a Chaplinesque tale of love, misfortunes, silly twists and blissful catharsis. 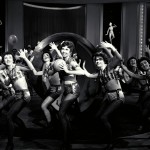 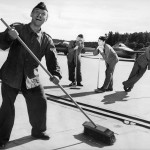