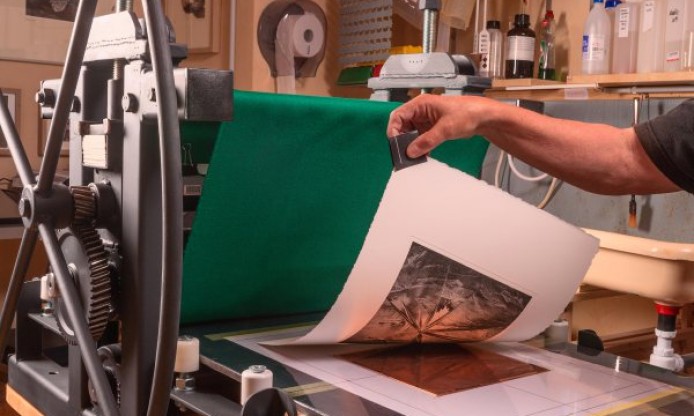 img. by Carles Mitjà: “The inked plate and a dampened paper are passed through the cylinders of an etching press”

From Photoconsortium’s officer for scientific activities David I. Franch.

An outstanding blog for those who have interest in photogravure techniques, by expert photographer and researcher Carles Mitjà. Carles is doing traditional photogravures, although he is innovating the process by using digital techniques for a scientific study of the process.

“Photogravure was part of the early attempts made in the discovery of photography. Several previous experiments had been performed by Nicéphore Niépce and Henry Fox Talbot derived from the pre-existing gravure and etching techniques. Finally, after the first negative-positive systems appeared and responding to a problem with the permanence of his paper positives (Schaaf, 2003), Henry Fox Talbot patented the first photogravure method in 1852. Many years later, in 1879, the photographer and engraver Karel Klic modified the early Talbot method taking advantage of Joseph Swan’s and Louis de Poitevoin’s technique for the so-called carbon printing method. Klic’s decisive contributions were the aquatint grain on the copper plate and the use of gelatinised paper sensitised with potassium or ammonium bichromate, known as the carbon tissue. The result was called the Talbot-Klic method.”

View other posts:
← Over 100 000 images are released for free use by the Finnish National Board of Antiquities
JPEG Pleno kicks off its activities towards standardization of light field coding / press release →