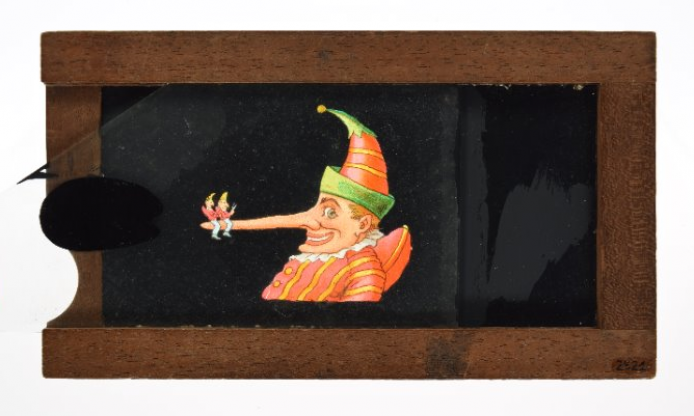 The magic lantern and digital imaging. Similarities between the 19th and 21st centuries.
until 28th January 2018 – MUSEU DEL CINEMA in Girona.

Nowadays, no one calls into question the all-pervading power of images in our world. Never before have creation, communication and the visualisation of images by means of highly diverse tools and devices been so enormous, so overwhelming and so powerful. The magic lantern, together with the light beam projector box, constitutes the means of visual communication which is the basis of this current-day reality.

This exhibition seeks to increase awareness of what the magic lantern was and what its shows were like, chiefly by means of a selection of glass slides for magic lanterns preserved at the Cinema Museum, many of which are on display to the general public for the very first time.

But the purpose of this exhibition does not end here, but rather it aims to go much further, searching for affinities between this 19th-century pre-cinematographic spectacle and the visual culture of the 21st century. They are two realities far removed in time and in terms of the technology used, but much more closely related to each other than one might imagine. In this regard, certain analogies can be established between the uses of the images of 19th century lanterns and those of the new technologies of the 21st century. We will thus strive to determine a link, a common thread, between the visual culture of our ancestors and our own, in which technology has changed, but the intentions and aims and, ultimately, the fascination for images haven’t.