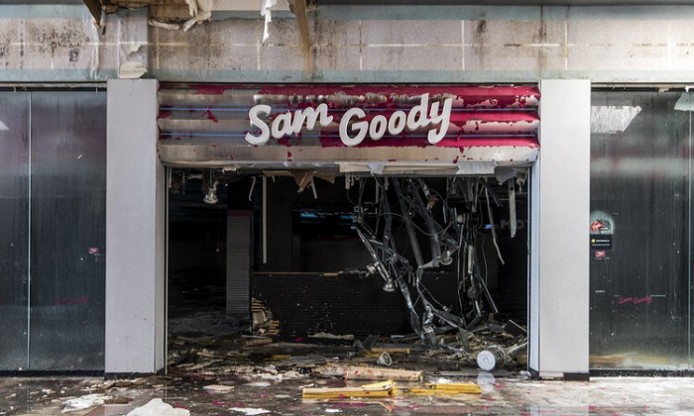 img. courtesy of the artist via Front Room Gallery website.

Front Room Gallery is proud to present “Mallrat to Snapchat: The End of the Third Place,” recent work by photographer Phillip Buehler documenting the death of the Wayne Hills Mall in Wayne, New Jersey. This is Buehler’s second solo show at Front Room Gallery.

“Mallrat to Snapchat: The End of the Third Place,”

a solo exhibition of photographs by 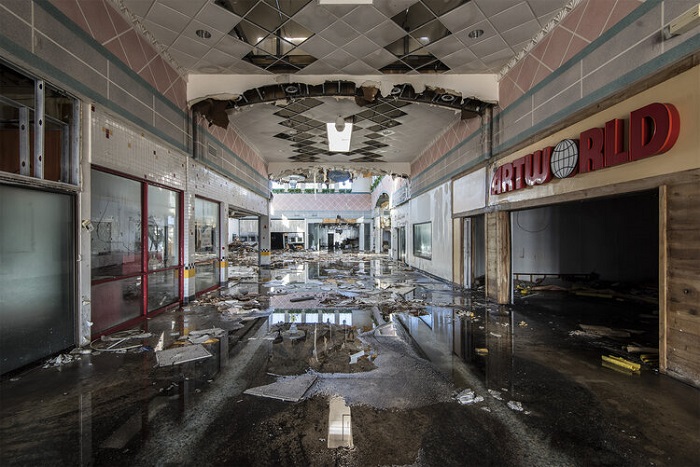 Buehler’s exhibition is part photography, part installation, part cultural critique, mixed in with nostalgia and genuine affection for this very American economical and sociological experiment — The Mall. Buehler takes a very intimate look at the beginning, and possibly ending, of mall culture in the United States featuring not only photographs, but also artifacts from the mall and its opening year, 1973. Under a photograph of a desolate Sam Goody will be a bin filled with almost 100 albums from that year, that visitors can flip through and play in the gallery on a vintage record player.

Buehler’s photos of iconic hangouts and lowbrow teenage meeting places ring out from the 1970’s, 80’s, and 90’s but are torn away from their movie soundtracks and sent into an apocalyptic icy future. Featuring Sam Goody, Waldenbooks, Toys R Us and many other familiar mainstays, Buehler shows these places ravaged and destroyed, familiar and frightening—a modern momento mori.

Phillip Buehler’s photographs are a snapshot in time—just not the one you would expect. One photo filled with debris, and the Burlington Coat Factory sign in the background, features the platform where Santa Claus used to sit for hordes of children waiting to tell their Christmas wishes. In another the lofty, multilevel, ceilings of mauves teals are reflected in the flooded hallways next to a the ironic sign of the closed “Artworld” franchise.

The subtitle of the exhibition is, “End of the Third Place,” a nod to a term coined by urban sociologist Ray Oldenburg in 1989. It refers to places where people spend time between home (first place) and work (second” place). In his influential book, “The Great Good Place,” Oldenburg explains why these ‘thirds places’ are essential to community and public life- arguing that bars, coffee shops, general stores, shopping malls strengthen community vitality.

Between 1970 and 2010, the number of American shopping malls quadrupled. As a center of American culture, malls were the setting for “Fast Times at Ridgemont High”, “Dawn of the Dead” and the recent Netflix series, “Stranger Things.” But recent changes in the retail climate have led to the slow death of indoor shopping malls in America.*

Phillip Buehler is a New York based photographer who documents the deterioration and remnants of neglected architecture constructed in the recent past. He is arguably the first to coin the neologism “modern ruins”. His photographs published in “Woody Guthrie’s Wardy Forty,” have won numerous awards, documenting the singer/songwriter/activist’s life at Greystone Park Psychiatric. He received his BA at Rutgers University and his MFA in photography at School of Visual Arts. Phillip Buehler has been featured in Art in America, The New York Times, Art News, The Art Newspaper, Wall Street Journal, American Photo Magazine, The Huffington Post, Hyperallergic, Gothamist, Art F City, The Sun, ABC, CNN, and numerous other publications.

* New Jersey Dream Mall, a new amusement park/mall just opened after 17 years of construction and 5 Billion dollars in taxpayer’s money. And New York’s Hudson Yards is a new famous playground for the rich. In a grandiose attempt to evolve from the homogeny found in retail driven architecture of the indoor mall model, these new complexes are more akin to theme parks than malls.