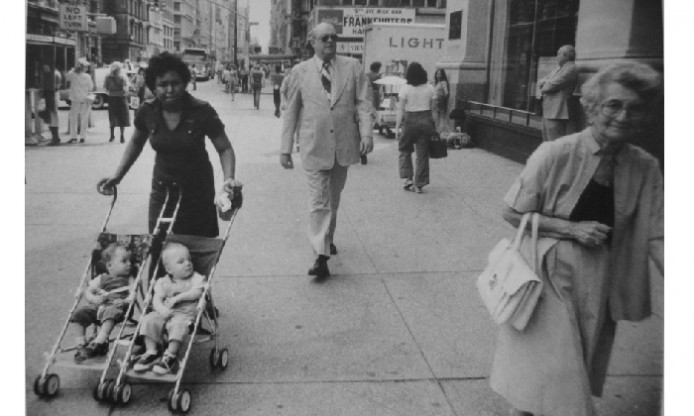 An exhibition organized by Tibor de Nagy Gallery recently presented Rudy Burckhardt’s work in photography and films from the 1970s and 80s. Rudy Burckhardt (1914-1999) moved to New York from Basel, Switzerland in 1935 and shortly thereafter started to film and then photograph the busy city streets. The art historian Rob Storr has said of Burckhardt’s photographs, “No one has recorded the tempo of New York life more attentively or accurately. Still photography has never moved so much as it does in Burckhardt’s images.” The writer Edwin Denby, who met Burckhardt in Basel and encouraged him to move to New York, described his process as recording people “dancing in daily life.”

Burckhardt approached his work in an unadorned and straightforward manner. He summed up his artistic project this way – “I am enough of an amateur existentialist and Buddhist to believe that we actually just mess around because we’re alive and awake – working, playing, scheming, falling apart, getting it together again but never in control.”

Rudy Burckhardt’s work has been exhibited widely in museums in the US and Europe.

About the exhibition, with selected works: https://www.tibordenagy.com/exhibitions/rudy-burckhardt4