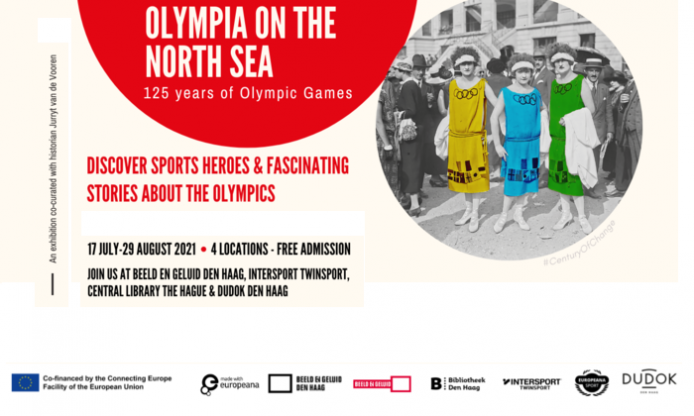 From 17 July to 29 August, The Netherlands Institute for Sound and Vision, Europeana XX: Century Of Change and Europeana Sports are thrilled to collaborate with local partners Sound and Vision The Hague, Intersport Twinsport, Dudok and Central Library The Hague on the pop-up exhibition “Olympia on the North Sea: 125 years of Olympic Games”, to offer a unique way to discover and experience the 20th century European sports heritage by exploring the fascinating legacy of the Olympic Games.

The interactive pop-up exhibition, co-curated with renowned sports historian and journalist Jurryt van de Vooren, explores the story of 125 years of Olympics through extraordinary stories of sports heroes and top athletes from the Hague and the world. With the help of interactive screens and their smartphone, users will be able to operate the exhibition themselves and discover the 20th century European sporting heritage through selected open-access items from the collections of – NOC*NSF, Bibliothèque Nationale de France and the Deutsches Sport & Olympia Museum, the National Diet Library (Japan) and Japan Search among many others-. These collections are available on the portal Europeana.eu

Four locations: from sports icons to sportswear and sponsoring

The pop-up exhibition can be seen for free at four locations in the center of The Hague: Sound and Vision The Hague, Intersport Twinsport, Dudok, and Central Library The Hague. Each location showcases the various Olympic Games’ legacies – from sport icons and heroes that broke records, sportswear influence in global trends, to the long history of sponsorships between brands and the Olympics. Stories of resistance and alternative movements to the Olympic Games are highlighted as well as how sports were used for rehabilitation.

The exhibition will run from 17 July 2021 to 29 August 2021 in Sound and Vision The Hague and will be placed for a limited time (17 July – 31 July) in the Intersport Twinsport, Dudok and Central Library The Hague.

Europeana XX: Century of Change and Europeana Sport are two EU-funded projects that aim to increase and improve the amount of high-quality content available in Europeana.eu, the trusted portal for digital cultural heritage in Europe.  Both projects are part of the Europeana family of initiatives supporting European cultural heritage institutions in sharing their digitized collections.

Europeana XX is dedicated to opening up 20th Century digital heritage collections, highlighting the changes that shaped Europe and still impact our world and lives today. The Europeana Sport project aims to deliver new digital objects relating to sporting heritage to Europeana.  The Netherlands Institute of Sound and Vision is a partner in Europeana Sport as well as the coordinator of Europeana XX.

Explore the collections and stories from 20th Century history and sports throught the Europeana XX and Europeana Sport editorials at www.europeana.eu/en