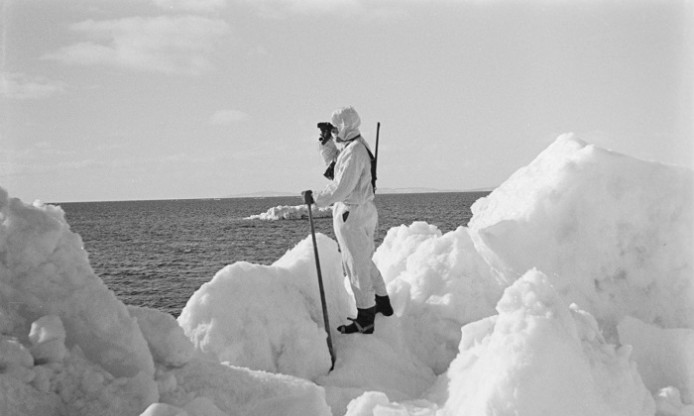 img. A seal hunter looking through his binoculars at the edge of the shore-fast ice. Across the open sea is the isle of Gogland. Photo: Jorma Jussilainen / Picture Collections of the Finnish Heritage Agency (KK2953:189).

A nice magazine named Kamera offers interesting insights on heritage photography, and regularly hosts articles by Museovirasto, the Finnish Heritage Agency, precisely by the staff of the Picture Collections diving into their vast photographic archive to source and narrate interesting stories from Finland and its culture, tradition and tangible/intangible heritage.

As an example of Finnish-heritage disappearing traditions, nevertheless preserved by photographic memory, the expeditions on ice to hunt for seals. Seal hunting was an important source of income and survival since the Stone Age, especially for people living in the farest locations of the archipelago. It is by the 1960s that the coastal hunting tradition had been replaced by other trades, so that this traditional hunt was progressively lost.

In the 1950s, photographer Jorma Jussilainen, who was working for the ethnology department at the National Museum of Finland, joined a seal hunting expedition, to document this disappearing source of livelihood: he travelled on a camp-boat pulled across the ice together with the hunters, recording an entire trip for 2-3 weeks.

In the picture above, a taste of the challenging conditions that even in modern days affected such hunts is well explicated!