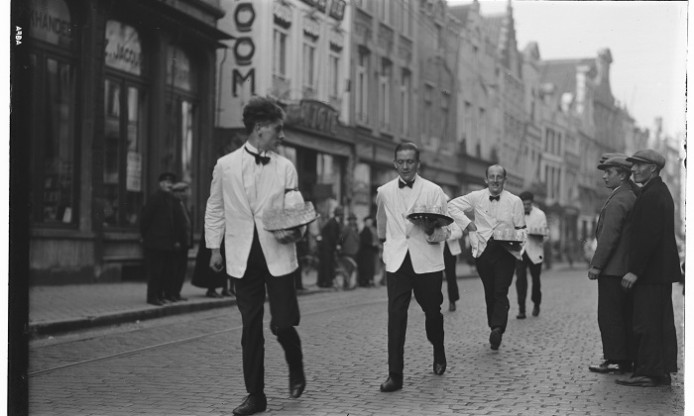 Beeldbank Brugge is the historic image database of the City of Bruges, uniting over 85.000 digitized images. If you want to know how a street, square, house, or historic building in Bruges looked like in the past, then you should go to Beeldbank Brugge. But you’ll also find images about historic events, the city’s social life, monuments, famous and less famous inhabitants, … Too much to mention!

Until 2016 Beeldbank Brugge functioned as an independent online platform. Since then it has been a part of platform Erfgoed Brugge, bringing together digitized collections across the city’s cultural heritage institutions. The image collection can be browsed through themes (e.g. city views) or searched for specific terms, places, and persons.

The city archives (Stadsarchief Brugge) coordinate the project. Most images come from collections donated to them by local collectors such as Jaak A. Rau, Guillaume Michiels, and Arthur Brusselle. There are also many images from the collections of Musea Brugge and Monumentenzorg & Erfgoedzaken, the city department responsible for historic buildings in the historic centre. With the help of Erfgoedcel Brugge, there is also a growing number of local collectors and societies that contributes to Beeldbank Brugge.

Beeldbank Brugge offers a great variety of image types. There are many old photographs, glass and film negatives, picture postcards, and slides, as well as smaller numbers of maps, etchings, and aquarelles. The oldest images date from the 16th century, but most were created in the 19th and 20th centuries.

Describing this beautiful collection is a long-winded work, which would be impossible without the help of staff members and a group of enthusiastic volunteers. Their efforts have been indispensable over the past two decades.

Indeed, Beeldbank Brugge is celebrating its 20th anniversary this year. It is the oldest publicly accessible local historic image database in Flanders, but still very much alive. Each year the database is used by several thousands of visitors and their number continues to grow. Ad multos annos!

← I² Identity and Innovation, exchange of good practices for school education
Photo-lit Photonovel Culture in Belgium, exhibition in Leuven →