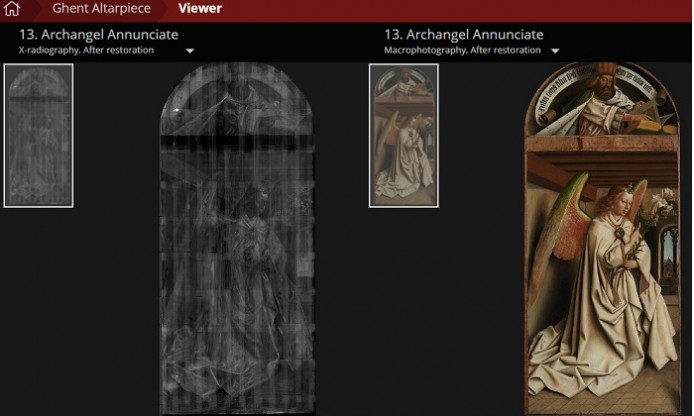 img. sourced via the Closer to Van Eyck’s website.

KIK-IRPA launched VERONA (Van Eyck Research in OpeN Access) project in order to study the creative process of Jan van Eyck (c. 1390-1441) and the different hands involved in the paintings of his workshop. Started from investigating the Ghent altarpiece, the research was later extended to the whole of Jan van Eyck’s oeuvre.

The close collaboration between the KIK-IRPA Brussels, the VUB Vrije Universiteit Brussel, Universum Digitalis, the Closer to Van Eyck project and Musea Brugge/Kenniscentrum vzw enabled the open access of all scientific images of the VERONA project for educational and research purposes.The Closer to Van Eyck website is designed and developed by Universum Digitalis, Brussels.

The work of art historians about van Eyck is now supported and enriched through new scientific investigations on the paintings that among others include advanced photo techniques: microscopic examination, analysis of paint samples and cross-sections, X-radiography, infrared reflectography and dendrochronology. Examinations on van Eyck’s artworks were usually carried out at the same time as the conservation-restoration of the works, and took place in various institutions each with their own scientific equipment. The stylistic comparisons and research made during the course of the twentieth century, based on poor quality black and white photographs, rarely took account of the differences in scale between paintings, differences in condition and so forth. Furthermore, the results of early scientific examinations should be reassessed in the light of technological advances made over the last decades. The publication of the new documentation in open access invites scholars of the scientific community worldwide to make objective comparisons on the basis of standardised scientific imagery. This may well lead to a revision of the corpus of works by Jan van Eyck.

During the last Europa Nostra award ceremony 2020 at Bozar in Brussels a new version was launched: Closer to Van Eyck – Further Works. The website contains 200 new images of 10 additional works including the famous Arnolfini portrait and the Turin-Milan Hours. In addition, the high resolution image viewer is improved with new functions and better touch screen support.