The big build – Recovery and reconstruction
A dramatically framed no-man’s-land, partly immersed in shadow, partly lit by an almost palpable, dusty shine. Very little in this picture hints to its situation in what was once London’s ‘Chinatown’. Located in the Limehouse area, the neighborhood was notorious for its (rumored) opium dens, white-slave traders and slums, inspiring movies as well as songs and books such as the Fu Manchu-series. During the Blitz, the area was heavily struck and never managed to reassume its position as the crux of the Chinese community. So when in the 1950s huge waves of Chinese immigrants hit London in the wake of the Hong Kong land reforms, they chose to settle elsewhere: a new Chinatown was born in Soho. In Finland, changes in cityscapes and social stratospheres were mainly connected to transformations in economy and industry. As industrialization fostered rural to urban migration, the housing market in cities such as Helsinki couldn’t cope with the infl ux of people, forcing many to sleep in the streets. Countermeasures were taken as early as 1949, when offi cials started to campaign against moving to the capital without having the necessary accommodation in place. Simultaneously, the state established the program ‘Arava’ through which it funded the construction of aff ordable houses. While several other Western European governments mounted loan, development and building programs and communist countries thought the nationalization of housing to be the solution, none were as successful as Finland, that since has managed to practically eradicate homelessness. 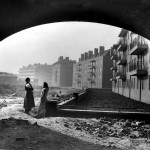 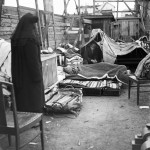 Evolving trades – Postwar problem-solving
Oft en remembered as an era of new beginnings, the 1950s were to a large extent a backlash to World War II. As political relations, living circumstances and economics underwent drastic changes, so did industry and agriculture. Coal – though threatened by other sources of energy – remained Europe’s main energy supplier throughout the decade. Yet measures were needed to allow for expansion of production in what was then a damaged and out-of-date industry. While some countries focused on enlarging capacity through migrant workers’ schemes, others invested in modernization. So did the Ruhr area: a chief supplier to the German market and pivotal force in the ‘Wirtschaft swunder’. This evocative photograph of a ‘Waschkaue’ showcases the professional set-up at the Zollern mine. The structure, built above a mine-shaft, provided first-class washing facilities, allowing for colliers to shower and
change at the beginning and the end of each shift. When not in use, clean and work clothes were raised on hooks: a safe and space-efficient storage solution. In postwar agriculture too, professionalization and organization were key. In Hoeilaart (Belgium), where grapes were grown in glasshouses as early as 1865, quality control, the establishment of a trade union and product diversification helped to sustain the international success of the luxury fruit during and after the war – a striking accomplishment, since at that time agriculture in Europe was generally on the decline. Yet Hoeilaart’s strategy to produce wines from otherwise redundant grapes and to provide central services through cooperatives, made for a viable business model that eventually earned its grapes the ‘Protected Designation of Origin’ label. 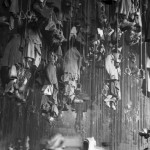 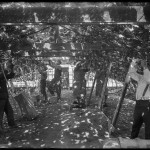 Age of icons – Tradition & futurism
In 1957, Paolo Monti – one of Italy’s most iconic photographers – masterfully documented the eleventh edition of the Milan Triennial: an international exhibition of industrial, architectural and decorative arts, that aimed at “improving the quality of expression in today’s civilisation”. This photo shows off the state-of-the-art American pavilion designed by Walter Dorwin Teague and Paul McCobb. Known as Mid-Century Modern (MCM), the style of the pavilion refl ects trends also seen in contemporary European design: simplicity, inspiration from nature, curved silhouettes, use of glass and aluminum, spatiality, a bright pallet, and a close link between form, function and aesthetics. Fifties design and architecture, as well as cars, fashion and music have remained ‘en vogue’ ever since. In recent years especially, all things vintage seem to be experiencing a boom, catering to a growing eco-conscious, anti-mass consumption market. Remnants of the ‘golden age of Scandinavian design’ – with legendary designers
such as Arne Jacobsen, Hans Wegner and Poul Henningsen – are particularly coveted, as the democratic ideals at the center of the movement resonate within today’s society. Shown in the second image is another side of fifties aesthetics – less iconic but equally as prevalent. In its very own way, the more traditional interior with its mix of patterned carpets, lace curtains and embroidered table runners, has found its way into contemporary homes via the bohemian or ‘boho-chic’ trend. 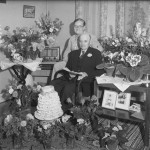