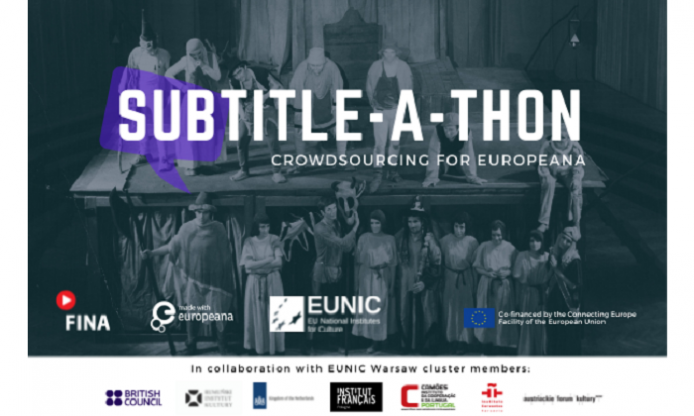 The National Film Archive – Audiovisual Institute (FINA) and The European Union National Institutes for Culture (EUNIC) Cluster Warsaw are pleased to invite you to a subtitle-a-thon focused on audiovisual heritage.

The kick-off of the subtitle-a-thon takes place on Saturday, June 12th at 11.00 CET with a two hour introductory session, and will run online for nine days with a closing session on Friday, June 18th at 17.00 CET. The event will be held in English with simultaneous interpretation to Polish.

Registration opens on May 20th at 12.00 CET at www.subtitleathon.eu.

The Subtitle-a-thons are four sprint-like online events organised by the Deutsches Filminstitut & Filmmuseum – DFF (Germany), The Istituto Luce Cinecittà (Italy), the National Film Archive – Audiovisual Institute – FINA (Poland) and, the Netherlands Institute for Sound and Vision – NISV (The Netherlands). During the events, people with different language skills work together toward a common goal: to create and add different subtitles to archival media fragments from various European collections.

The aim of the Warsaw initiative is to make audiovisual material accessible to multilingual audiences and for AV-heritage to become more widely available. The event also hopes to promote European national languages and to stimulate discussions during the events around the value of language, thereby increasing the interest of local communities in 20th-century cultural heritage. The event targets youngsters and adults interested in audiovisual heritage, language and multilingualism, and more specifically, translators, language teachers and followers of advanced language courses (C1 and above) and language departments students. It is eligible only for participants fluent in two or more languages, including Dutch, English, French, German, Polish, Portuguese, Spanish or Romanian.

Participants will be invited to work individually, using a specialized media player with a subtitle editor, to subtitle the available audiovisual material. The winners of the Europeana XX Subtitle-a-thon Challenge Warsaw will receive online gift prizes and all entrants will receive a participation certificate.

Europeana XX: Subtitle-a-thon Challenge Warsaw is hosted by the National Film Archive – Audiovisual Institute under Europeana XX: Century of Change, an EU-funded project dedicated to opening up 20th-century digital heritage collections, highlighting the changes that shaped Europe and still impact our world and lives today. Europeana XX is part of the Europeana family of initiatives supporting European cultural heritage institutions in sharing their digitized collections. Millions of digital objects from all across Europe are showcased on Europeana.eu, the trusted portal for digital cultural heritage in Europe.

To maximise the impact the events are organised in collaboration with EUNIC – European Union National Institutes for Culture, Europe’s network of national cultural institutes promoting the role of culture and intercultural dialogue in EU’s internal and external relations, including promotion of languages.

4. Embassy of the Kingdom of the Netherlands

More about the event: www.subtitleathon.eu

Europeana XX is co-financed by the Connecting Europe Facility Programme of the European Union, under GA n. INEA/CEF/ICT/A2019/1932087