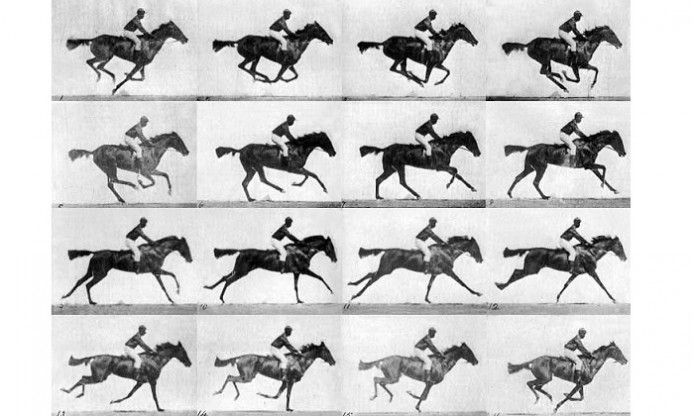 Edweard Muybridge is very well known for his work in the study of locomotion, and it all started when he met Leland Stanford, a horseman and breeder of racing standardbreds and thoroughbreds. Stanford was interested in horse gait analysis, and disagreed with the general fashion in which horse gaits were portrayed in paintings of the day.

At that time, the style was for galloping horses to be painted with their forelimbs and hindlimbs being stretched out in front and behind respectively, as for example in Le derby d’Epsom, by Théodore Géricault, 1821.

Muybridge was therefore employed by Stanford in 1872 to prove that in the gallop there was a moment where all the horses’ legs were off the ground simultaneously, albeit this was almost impossible to see with the naked eye. After a few unsuccessful attempts, Edweard came up with the idea of arranging a dozen cameras all triggered one after another with a set of strings, to take photographs in rapid succession – one twenty-fifth of a second apart to be exact. They created a photoset and the selected mare Sallie Gardner was put to gallop at 36 miles per hour. In the video below, the experiment is shown with a virtual reconstruction by the CRDI – Ajuntament de Girona:

The images taken by Muybridge actually proved that at certain points of the stride the mare lifted all four legs off the ground together, showcasing without a doubt that there was a moment of suspension in gallop. Using his own invention Muybridge went on to put the images together creating a proto-motive. The world’s first ever movie was of a galloping horse!

The work of Muybridge highly influenced artists and painters, and was pioneer to today’s biomechanics analysis for horse and human athletes.