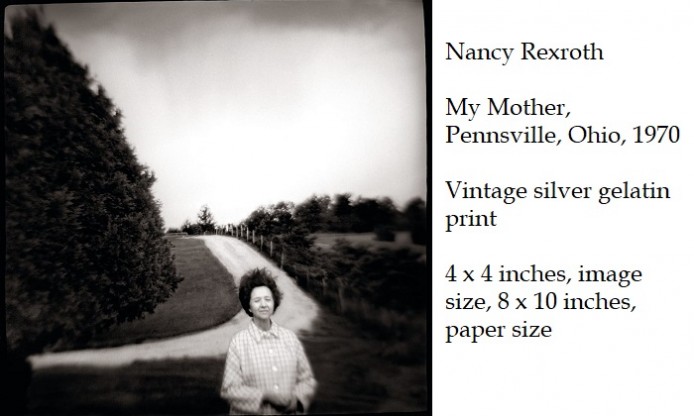 In the late 1960s, Nancy Rexroth (b. 1946) began photographing the rural landscapes, children, white frame houses, and domestic interiors of rural Ohio, where she was attending graduate school.  At a moment when photographic technicality and precision were held high, Rexroth opted for a $1.50 toy camera (the “Diana”) that had irregular exposures, bent perspectives, and faulty focus.  She then further manipulated her photographs by deliberately blurring or overlaying them, abandoning form in the name of feeling, description for evocation.  The result was a haunting, dream-like aesthetic that vibrated with joy, sadness, and longing in the slanting 4-o’clock light.  As Rexroth explains, the Diana offered “a pathway from the highly technical to the more internally sensitive.”

In 1977, with a grant from the National Endowment for the Arts, Rexroth self-published the series in a book entitled IOWA. For Rexroth, though the images were captured in Ohio, they evoked childhood memories of summers spent in Iowa visiting relatives. With the help of the title, Rexroth explains, she hoped to demonstrate that “a photograph doesn’t have to be about the subject at hand. It can be about intangibles, about emotions, about my own interiority.”

The photographic community was mesmerized.  Not long after, Aperture published a selection of IOWA images in a special issue called “The Snapshot” alongside works by Robert Frank, Garry Winogrand, and Emmet Gowin, and the International Center for Photography, Corcoran Gallery of Art, and the Smithsonian Institution presented IOWA works in major group exhibitions.

Photographers like Cindy Sherman, Richard Prince, Carrie Mae Weems and many others would soon explore what and how images mean and feel, and photography as a complex visual language would become a familiar genre for artists and scholars alike. Rexroth’s IOWA was at the vanguard, and, more than four decades later, the images–both individually and as a collection–still have the effect of something urgently new.