Out of the studio. Photographers and mobile studios.

The second issue of the journal Photographica therefore intends to explore both a material and a visual history of the mobile photographic studio as well as to sketch out an ethnography of ambulant operators. Special attention will be paid to devices and uses of studios “beyond the walls”. The reflection is not limited to the genre of portrait but is open to all aspects of mobile studios. Contributors are welcome to question photographic mobility from different perspectives and to address work, material and practice issues more generally.

Moreover, there will be special consideration of ambulant photographers’ living conditions as well as of the historicization and the geographization of the ‘mobile studio’ phenomenon; a phenomenon subjected to many variations, as attested by the participation of casual or professional photographers, explorers, excursionists and scientists.

Numerous references to travelling photographers and mobile studios are sprinkled throughout the literature dedicated to photography. Robert Taft refers to photographic studios on board ships that sailed American rivers in his book Photography and the American Scene (Taft, 1938, p. 65-67). He recounts an undated anecdote about a confrontation between an ambulant daguerreotypist and villagers dissatisfied with a portrait: the crowd ended up sending his photographic van and all its content flying. In 1858, the critic Ernest Lacan considers ambulant photographers to be at the bottom of the social ladder (Lacan, 1858, p. 77). In the journal La Lumière, he does not hesitate to designate them as “street entertainers of photography”. Two years later, a statistical survey about photographic industry in Paris indicates that the largest studios regularly sent photographic operators on missions abroad but no figures about ambulant photography are provided (Chambre de commerce, 1864). Finally, in 1984, Ann Parker and Avon Neal reveal through their study that ambulant photographers and mobile studios in Guatemala were still an active profession at the end of the 20th century (Parker & Neal, 1984). What did such mobile studios look like precisely? How many were they, depending on periods and places? To what extent do they invite us to rethink photography practice from a material and social perspective? 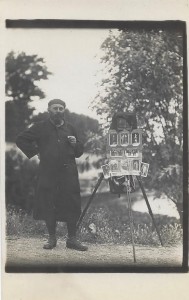 By a “mobile” studio, we mean a (reduced or complex) device, which is portable and allows an integrated outdoor practice of photography, outside both the studio and the laboratory, combining all necessary steps to make photographs (from the preparation to the development of the medium, and sometimes to the dissemination and the sale of the final image). The overlooked history of photographic mobility may be considered through this material specificity that distinguishes it from the history of outdoor photographers and modern photo-reporters.

In the 1970s, Susan Sontag, did not hesitate to associate imperialism with the spectacular expansion of photography. A short time later, the series “Early Photography in…” published since 1977 by the journal History of Photography, as well as the “world” histories of the 80s fostered more detailed investigations into the way photography has spread out across the world and has taken root in specific regions. Examples include the studies of Terry Bennett on Japan (2006) and China (2009, 2010, 2013) and those of Erika Nimis and Marian Nur Goni on Africa (Fotota blog, 2013-). Numerous research programs and publications currently address the effect of exile and migration on photographers and their pictures. They define photographers as “contact zones” (Hannoosh, 2016) and photography as “the ultimate diasporic medium” (Dogramaci & Roth, 2019), highlighting the nomadic quality of both the producer and the images.

To inquire the history of mobile studios and ambulant photographers today, means to join these discussions. That is to adopt a transnational logic and to take into consideration flows of people and goods. This issue provides another opportunity to study the local and interior mobility (from town to town, the relationship between cities and countryside) as well as worldwide mobility. Simultaneously, it invites us to investigate the social history of photography and the archetype of the ambulant photographer. Indeed, the category “ambulant photographers” is frequently associated with small trades as well as with urban or rural “popular” practices linked to trades and markets (operators of ferrotypes, tintypes, painted canvases and instant prints for instance). The ambulant photographer as depicted through books, movies, press articles, is often a destitute person: “He appears to us as a poor suffering being, this Kor, ambulant photographer, fairground artist who travelled from town to town” (Claretie, 1912, p.5). However, exactly like the idea of popular photography, the representation and the status of ambulant photographers deserves to be qualified and refined. Even more so, due to the recent studies about worker mobility and transmission of traditional skills in modern times. Each of them invites us to rethink sedentary photographic practices in the light of other ambulant professions (engineer, trader, peddler, qualified craftsman, worker, etc.) and to question the hierarchy between contractual operators and self-employed photographers .

The ambulant photographer is often presented as the plebeian version of the studio photographer, but the pictures he produces participate significantly in another “photographic culture”, both obscure and archaic, modest and genuine, resistant to technological changes as exemplified by the mythologized figure of Eugène Atget. In an enlightening article about ambulant photographers, Ilsen About emphasized the importance of such professions in “the acculturation of contemporary societies to the daily practice of photographic image” and to “the slow and lasting diffusion of visual objects in material culture” (About, 2015). This history of material culture (and thus, of the way contemporary societies relate to images) should reflexively consider photography itself and think about the terms and conditions of photographic practices that flourished outside the studio.

Proposals will be peer-reviewed. They may be accepted, accepted with amendments, or refused.

Articles may be written in French or in English. The should not exceed 30 000 characters, spaces included. Authors should provide an abstract of their article (1000 words) and key-words (from 5 to 10). Illustrations of 300 dpi with their complete caption and credits may be associated (from 10 to 15). Each image should be inserted in the text at the desired place.

For any inquiry about reproduction rights for images, please contact redaction@photographica-revue.fr

Please, write your name, email address, occupation and institutional affiliation (university and laboratory) as well as a short bio-bibliography in a document distinct from your proposal.

Articles should be sent to: redaction@photographica-revue.fr