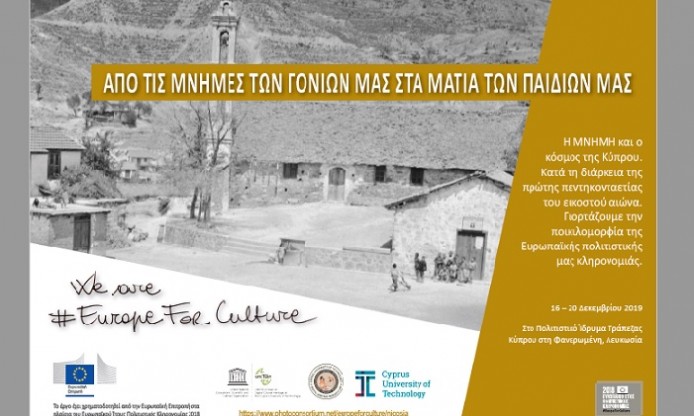 This exhibition is the Cypriot instance of the WeAre#EuropeForCulture series, and it was co-created in collaboration with the Digital Heritage Lab of the Cyprus University of Technology, through a co-creation process which included mixing archival photographic content with crowdsouirced images and memories for te local community. the exhibition is hosted in the prestigious premises of the Bank of Cyprus Cultural foundation.

Through commemorative individual photographs depicting fragments of the lives of our ancestors during the first fifty years of the twentieth century, the exhibition attempts to revive identity and memory, with each photo highlighting the rural and urban people, families and daily occupations, especially in the fields of agriculture, medals, education and public life.

The crowdsourcing action will continue in the whole week 16 to 20 December, while the official presentation of the initiative was held on the 18th with the presence of important international speakers.

← Rephotography: Coventry Then & Now – old photos and new fun
Out of the studio. Photographers and mobile studios. →