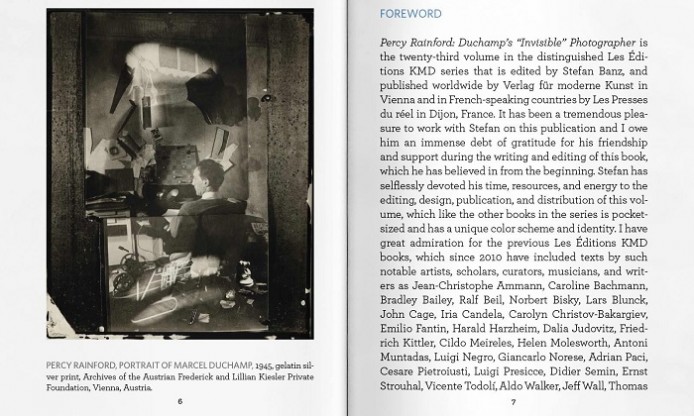 This book is the first publication to focus on the work of the Jamaican-born, American photographer Percy Rainford, a longtime collaborator of both Marcel Duchamp and architect Frederick Kiesler.

Drawing from extensive archival research and interviews with the artist’s family, author Michael R. Taylor showcases the work of this remarkable avant-garde photographer, while also shedding new light on his collaborations with Duchamp and Kiesler. Between 1945 and 1956, Rainford collaborated on a number of art projects with Marcel Duchamp, including the special Duchamp issue of view magazine and the cover of the first issue of le surréalisme, même, which featured duchamp’s female fig leaf. Duchamp met Rainford in January 1945 through Frederick Kiesler, who also frequently collaborated with Rainford, beginning with the photography for the art of this century gallery in 1942.

Rainford began his career in the early 1930s as a photographer of fine art for catalogues and other publications, working for major museums in New York, including the Whitney Museum and the Metropolitan Museum of Art, as well as artists, who often needed high quality reproductions of their paintings and sculpture when applying for fellowships. After meeting Kiesler and Duchamp, Rainford’s work began to transcend its documentary impulse and the photographs he made in the 1940s and 1950s reflect his newfound interest in modernist experimentation. Although virtually unknown today, Rainford was a highly respected artist during this period.

← Participatory approaches for creativity and entrepreneurship – REACH workshop
1989 and its changes – Exhibition in Budapest, 26th April 2019 →