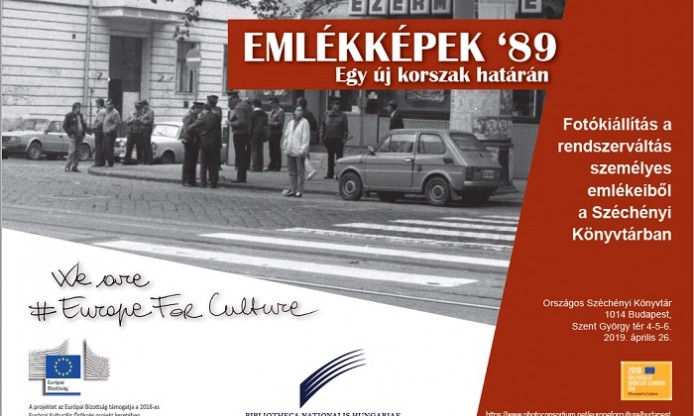 First of these exhibitions to premiere is “EMLÉKKÉPEK’89 – Egy új korszak határán” (At the border of a new era), in Budapest on 26th April 2019. The exhibition is focused on the changes brought in by the events of 1989, and it is organized by OSZK with the participation of students from the University of Budapest.

In 1989, the fall of the party-state system not only changed the political environment and brought democracy to Hungary after years of dictatorship, but also transformed our cultural environment, the image of the city and of the villages, the fashion, the way of spending leisure time, consumption – everything. With the abolition of the one-party system, the mandatory military training for children disappeared, travel was free, state-owned supermarket chains were replaced by shopping malls, privatization started, and private enterprises were set up in all areas of life. The monuments of the communist dictatorship were demolished and transported, replaced with other types of monuments, often on artificially forgotten topics such as the 1956 Revolution. This historic change also showed in towns and villages the ruins of buildings, factories, former corporate resorts, barracks, and entertainment venues that are still forgotten and unused are a sign of such change.

In this exhibition we celebrate the peaceful transition of the regime change by publishing pictures of some key events, but we also want to show the consequences, both good and bad, we still see today in our environment: the “lost world” of once-loved cinemas, old stores, buildings and landscapes compared to the novelties that democracy has brought in to enrich our cultural heritage.