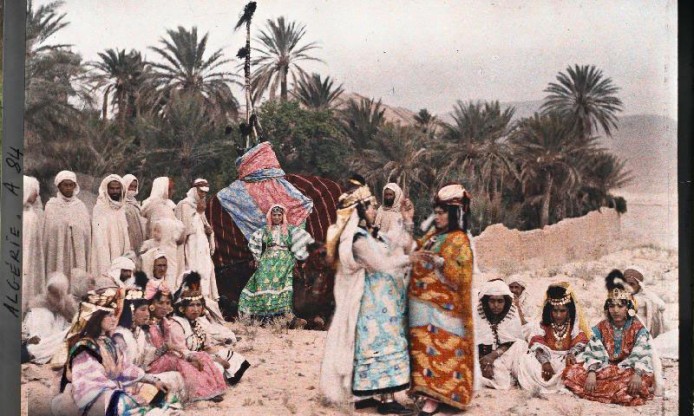 Exhibition at the Allard Pierson Museum in Amsterdam until 6th January 2019.

From 1908, the Frenchman Albert Kahn sent photographers all over the world to create a photo collection aiming for world peace. Colour photography had just been invented; Kahn made the most of it. This is the first exhibition in the Netherlands of a selection from these historical, colourful and often poignant pictures, supplemented with loans from Dutch institutions.

The dawn of the twentieth century saw the introduction of colour photography. With autochromes—glass plates on which a layer of potato starch served as a colour filter—the colours of the world could now be preserved.

As soon as this technology appeared on the market, French banker and philanthropist Albert Kahn started hiring photographers to capture the world in colour pictures. His project, Les Archives de la Planète, was born from an ideal of mutual respect and world peace that is in stark contrast to the horrors of the world war that soon broke out and whose end we commemorate this year.

From this ethnographic treasure of over 72,000 autochromes, kept at the Paris Musée Albert-Kahn, the Allard Pierson Museum exhibits a selection—as reproductions, inevitably: autochromes are too vulnerable for display. Also on view are colour photos made by the Russian Sergey Prokudin-Gorsky and Dutchmen such as Bernard Eilers and Jacob Olie, Jr.

The exhibition was hosted originally by the LVR-LandesMuseum in Bonn, a partner in the COBBRA network. The Allard Pierson Museum supplements the selection from the Musée Albert-Kahn with autochromes from Rijksmuseum Amsterdam, film fragments from EYE Film Institute, and photo books from the University of Amsterdam’s Special Collections.