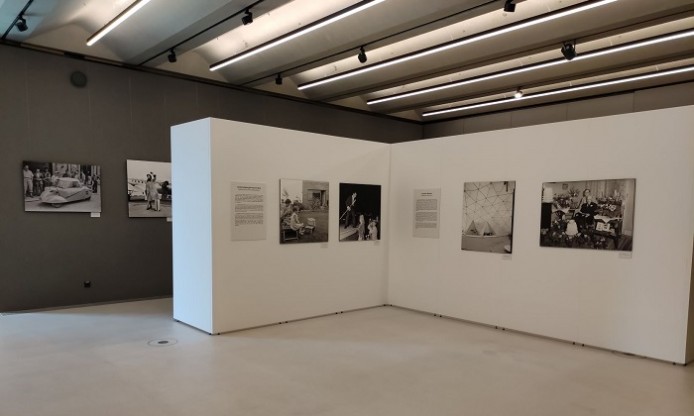 From October 2021 to February 2022 the exhibition “Blue Skies, Red Panic” will be on display in the Ludwig Erhard Zentrum in Fürth, Germany. This exhibition was one of the results of the Connecting Europe Facilities funded generic services project “Fifties in Europe: Kaleidoscope” which focused on user engagement and had as a main theme the visual identity of the Fifties in Europe, reflected by digitised photographic heritage collections. With the funding for generic service projects, the European Commission supports the further content development of the Europeana portal. The project was led by Cultural Studies KU Leuven CS Digital.

As usual for exhibitions created by Photoconsortium, “Blue Skies, Red Panic” features high-quality reprints of vintage photographs from various European collections, brought together in an appealing, modular and layered narrative. The exhibition was curated by Sofie Taes, who made several exhibitions for Photoconsortium using digital, physical as well as hybrid formats. Next to online publications, mainly through europeana.eu and withculture.eu, the outcomes include museal exhibits in several European countries and a multi-sensory heritage experience pairing a physical setup consisting of a tv screen and HDMI-stick running on the innovative MuPop technology, with a digital, interactive showcase to be operated by smartphone.

“Blue Skies, Red Panic” tells a story of hopes, aspirations but also fears and concerns in the turbulent era of rebuilding Europe after the Second World War. While the East-West divide – which inspired the exhibition title – was an unavoidable lead theme, the multi-part narrative addresses a wide array of themes that evoke how this post-war generation saw themselves and their future. From the political struggle that erupted on both sides – reciprocally and internally – of the Iron Curtain, the story moves on to recount instances of social upheaval (migratory waves, decolonisation etc.), the emergence of countercultures, the interplay between seemingly conflicting aesthetic concepts, and the firm belief in the positive power of technological advancement. The black-and-white photographs, varying extensively in terms of style, inspiration, perspective and provenance, allow visitors to catch a glimpse of how these (self)perceptions and projections were expressed in an increasingly visual culture.

The exhibition first opened in Pisa, at the Museo della Grafica located in the Palazzo Lanfranchi in September 2019, and went from there to Centre Cultural in Girona, the Campus Carolus visitor’s hall of KU Leuven, and the famous Museum für Fotografie in Berlin in February 2020. Another chapter recently opened for “Blue Skies, Red Panic”, as its newest re-creation is now hosted at the  Ludwig Erhard Zentrum in Fürth – named after the minister of economic affairs and later chancellor of West Germany who was in office from 1949 to 1966, and is credited to be instrumental in the Wirtschaftswunder that heralded the economic post-war revival.

Not traveling (that way) just yet? You can view the web version of the catalog online on the website of Photoconsortium and a  reconceptualized version of this exhibition is available as a virtual showcase on Europeana.