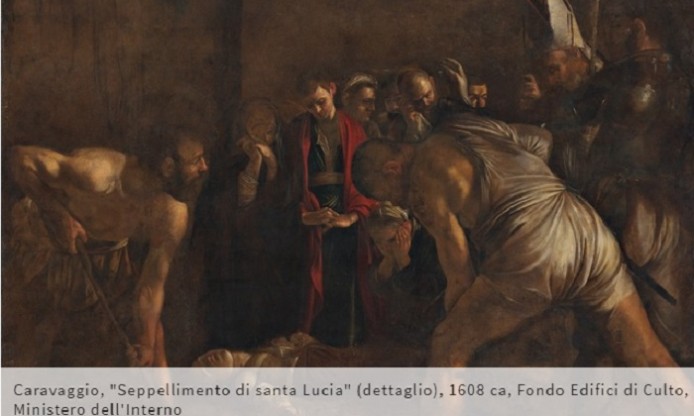 Since many years, there are investigations and studies suggesting that renowned painter Michelangelo Merisi aka Caravaggio may be the first “photographer” ever.
It all starts with the camera obscura concept: Leonardo da Vinci already described the technique of using lens and mirrors to project an image, and the scientist Giovanni Battista Della Porta mentions that Caravaggio was inspired to use this technique for creating his artworks. In facts, Della Porta already in 1582 improved the camera obscura technique, which was known and in use since the 17th century, by two additional lens which allowed to project the images on focus and upright.

Han Chinese philosopher Mozi first wrote about Camera Obscura in 4thCent.BCE. It is possible that many artists traced camera obscura before Caravaggio but unlikely to the accuracy of the “new” lens technology that became available to artists his vintage. Camera obscura effects can also be seen without a lens so it is probable that cave dwellers witnessed images on the walls which may have inspired them to create cave paintings.

The first published example of a camera obscura illustration is by Gemma Frisius:

The above image is by Topfoto. Here, other illustrations by Gemma Frisius digitized at KU Leuven are accessible.

Back to Caravaggio, it seems that the painter had turned his studio into a giant camera obscura, by creating a hole in the ceiling to get enough light for projecting images onto the canvas. In the video below, PhD Art Historian Roberta Lapucci shows a studio-made version of Caravaggio’s camera obscura, constructed with equipment available at the time period, and demonstrated by MFA in Studio Art student Meredith Taylor.

Additionally, other research claims that Caravaggio also used chemicals which fixed images on the canvas, like it was a primitive photographic film. “We were already sure Caravaggio projected images of his sitters, but we have now found mercury salt in his canvases, which is light-sensitive and used in film” said Roberta, who investigated the use of chemicals after building the camera obscura together with artist David Hockney.

An conference by film director Paolo Benvenuti who collaborated with Roberta Lapucci since many years was organized as a side event of the current exhibition Caravaggio. The Contemporary on display at MART museum in Rovereto until April 2021. “La rivoluzione di Caravaggio. Paolo Benvenuti, 11th February h. 18.30”

← The 7th Edition of the Jalón Ángel International Photography Award is open
A wealth of digitized images from KU Leuven’s archives published in Europeana! →